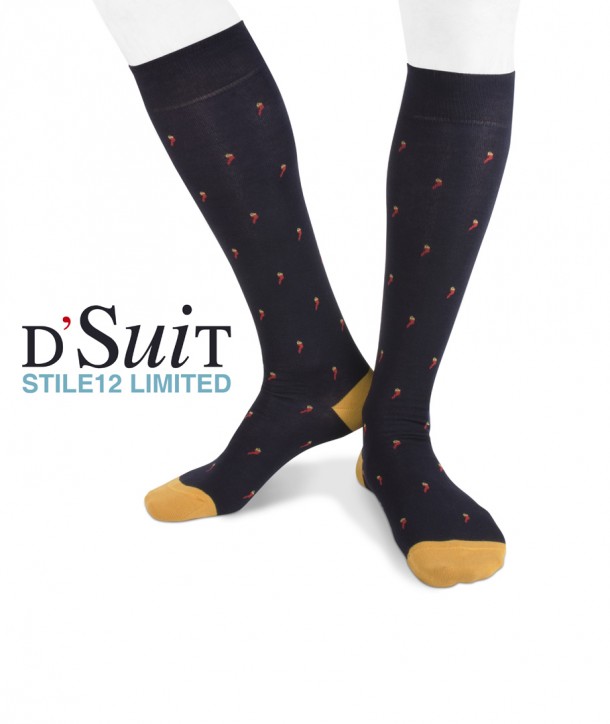 LIMITED COLLECTOR EDITION OF 120 PAIRS.
TOGETHER WITH EACH PAIR OF SOCKS YOU'LL RECEIVE A SMALL CARD, SIGNED AND NUMBERED BY DIEGO DI FLORA.

Diego Di Flora is a young Italian television writer, blogger and art director.He graduated in Economics from the University of Naples Parthenope, and after a few years specializing in communication and management and organization of large events.He began his artistic career as an organizer of the Show "Un Mondo di Solidarietà" in 2006, supporting the Sicilian actress Maria Grazia Cucinotta.In 2012 he is artistic director of the Naples "Made in Pride" in Naples with great success, parading through the city with the actress Ornella Muti inviting as sponsor.In January 2012, it is stated on TV as a television writer of "Made in Love", described by critics as one of the cult shows of the Italian TV.In the same year deals with the artistic direction of "È Sposa", event dedicated to the world of the wedding, by parading the showgirl Raffaella Fico pregnant: in a few hours the picture goes around the world. He continued his artistic direction of the event in 2014 choosing Stefano De Martino as testimonial, the first man chosen Italy as the face of an event dedicated to weddings and continues this year with a revolutionary campaign, putting on the poster a photo of the image three couples, one straight, one gay and one lesbian kissing in a former church in Naples. In the same edition decides to parade in wedding dress Vladimir Luxuria, in just 24 hours the picture goes around the world.In 2014 launches its blog: dsuit.it portal dedicated to fashion maintained and run by him personally that deals with trends, news and tips on fashion. His blog is considered more a journalistic portal, which deepens and interprets the style of Italian and foreign designer brands.Diego is also a columnist for Julie Italia and for Napoli Magazine where he edits a weekly column of interviews with celebrities titled "A TU PER TU".Soon on Sky will broadcast a program which was the author entitled "Il fidanzato ideale".

For a perfect manteinance we suggest:
Initial water temperature should not exceed 30C or 65 to 85F, and with low spin speed.
No bleach product may be used. The sock is not colorfast or structurally able to withstand any bleach.
A machine dryer may not be used. Usually accompanied by an alternate drying method symbol.
Socks may not be smoothed or finished with an iron.
Socks may not be commercially drycleaned.
It's always better to turn inside out your socks before washing them, especially socks with embroidery, stripes and special designs.

No customer reviews for the moment.

In order to give you a better service Stile12 uses cookies. By continuing to browse the site you are agreeing to our use of cookies.